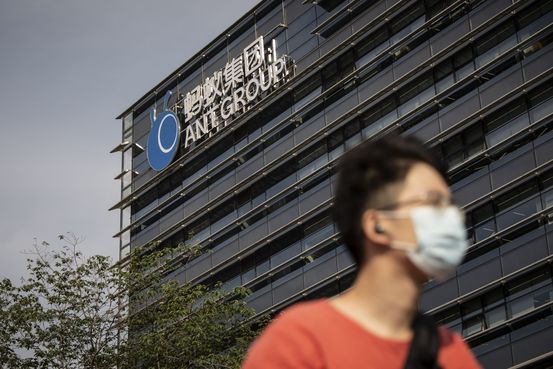 China’s banking and insurance regulator said Thursday that it had approved an application by Ant Group Co. to set up a consumer-finance company, the first milestone in the financial-technology giant’s restructuring.

Ant will hold a 50% stake in the new entity, registered in the southwestern municipality of Chongqing, with the rest held by six other shareholders. The company, Chongqing Ant Consumer Finance Co., is licensed to conduct consumer lending and other operations. It will hold Ant credit services Huabei and Jiebei, which have been used by almost half a billion people in China.

has been forced to overhaul its business after Chinese authorities canceled its initial public offering in November.

One of the areas that drew Beijing’s ire was Ant’s colossal consumer-lending business. At the end of June last year, people who had borrowed money from Ant’s platforms had a total of the equivalent of $271.1 billion in outstanding loans.

Ant originated most of the loans in partnership with commercial banks, which provided the bulk of the funding for the debt. Many of the loans were taken out by young people without established credit histories. Regulators frowned upon Ant’s activities because they encouraged some people to borrow and spend beyond their means and created risks for the banks that supplied funds for the loans.

The shareholders in the new consumer-finance company include two state-owned financial institutions.

a subsidiary of state-owned

, holds a 15.01% stake, while China Huarong Asset Management Co., one of the country’s largest managers of distressed assets that also operates other financial businesses, owns 4.99% of the business.

China’s largest producer of lithium batteries for electric vehicles, Contemporary Amperex Technology Co., has an 8% stake. The remaining owners are the mainland Chinese subsidiary of a Taiwanese bank, a transportation and surveillance-services provider, and a medical-device manufacturer. Alibaba Group Holding Ltd., which owns a third of Ant, has a minority stake in the transportation and surveillance-services provider firm.

Ant said Thursday that under the guidance of regulators, it will work with the other shareholders of Chongqing Ant Consumer Finance “to serve the needs of consumers, and to continue enhancing the quality of financial services and risk management capabilities” on Ant’s platforms.

The new company will fundamentally change how Ant conducts consumer lending. In the next six months, Ant intends to transition from its current model of operating a microlending platform into a consumer-finance business that has a more diverse range of funding options.

Such companies can use capital from their shareholders, borrow money from other financial institutions in the interbank market and issue asset-backed securities to fund loans they make. They can also invest in fixed-income products, according to Chinese regulations.

Setting up the new consumer-finance company means Ant will end a practice that for years enabled it to avoid bearing default risks for the consumer loans it originated with banks. Under that previous model, Ant’s proprietary consumer data and risk models were used by banks, which provided the funding for loans and bore the risk of losses if people didn’t repay their debts. Ant earned a portion of the loans’ interest income.

When Chongqing Ant Consumer Finance is running, the new company will fund and bear the risk of loans it makes.

It will also refer individual borrowers to banks that would underwrite personal loans and incorporate some of Ant’s data into their risk assessments. Such loans, which would be completely funded by banks, wouldn’t be branded as Huabei or Jiebei products, according to a person familiar with the matter.

There could also be some loans that the new company makes together with banks. Under such co-lending arrangements, the consumer-finance firm will supply at least 30% of the funds—and bear the corresponding default risk—and banks will provide the remainder, in compliance with new Chinese regulations, the person added. These loans would be Huabei or Jiebei offerings, according to the person.

Before Ant’s blockbuster IPO was scuttled, digital lending was the company’s biggest growth and profit engine. Late last year, Ant began cutting credit limits of some younger borrowers, and several analysts expect Ant to shrink its consumer-loan portfolio substantially following the regulatory clampdown. Most of the personal loans the company originated in the past are short-term and will gradually run off over the transition period.

Hangzhou-headquartered Ant in April said it would restructure into a financial-holding company overseen by the People’s Bank of China, a change that will subject it to regulations similar to those governing banks. It also plans to set up a licensed personal credit reporting company.

Write to Jing Yang at Jing.Yang@wsj.com and Xie Yu at Yu.Xie@wsj.com

Southwest Airlines CEO Gary Kelly to Step Down in February

Where to Find Rare Deals in Business Class and First Class