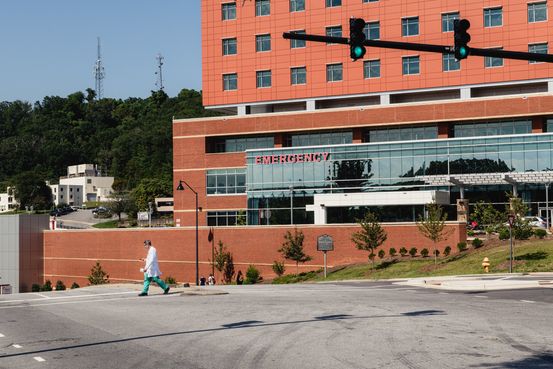 have struck a deal to develop healthcare algorithms using patient records, the latest foray by a tech giant into the $3 trillion healthcare sector.

HCA, which operates across about 2,000 locations in 21 states, would consolidate and store with Google data from digital health records and internet-connected medical devices under the multiyear agreement. Google and HCA engineers will work to develop algorithms to help improve operating efficiency, monitor patients and guide doctors’ decisions, according to the companies.

“Data are spun off of every patient in real time,” said Dr.

chief medical officer of HCA, which is based in Nashville, Tenn. “Part of what we’re building is a central nervous system to help interpret the various signals.”

The deal expands Google’s reach in healthcare, where the recent shift to digital records has created an explosion of data and a new market for technology giants and startups. Data crunching offers the opportunity to develop new treatments and improve patient safety, but algorithm-development deals between hospitals and tech companies have also raised privacy alarms.

What is the future of big tech in healthcare? Join the conversation below.

Google and Ascension sought to develop a search tool for patient information. The work, dubbed “Project Nightingale” and described in articles by The Wall Street Journal, prompted an outcry over privacy of patient records shared with Google, which included names, dates of birth and medication information. The companies said the effort complied with federal privacy laws.

Other tech giants have struck similar deals with hospitals that grant access to identifying information in technology development, such as an effort by

and hospital system Providence to use patient records to develop cancer algorithms.

HCA said Google isn’t permitted to use patient-identifiable information under the agreement. Dr. Perlin said HCA patient records would be stripped of identifying information before being shared with Google data scientists and that the hospital system would control access to the data. Terms of the deal weren’t disclosed by the companies.

Google will access data when needed with consent from HCA, but the tech giant can develop analytic tools without patient records and allow HCA to test the models independently, said

managing director of healthcare and life sciences at Google Cloud. “We want to push the boundaries of what the clinician can do in real time with data,” he said.

Personal patient information is protected under the federal health-privacy law, known as the Health Insurance Portability and Accountability Act. The law allows hospitals and some other healthcare companies, such as health insurers, to share information with contractors, which must also abide by the law’s privacy protections.

a Stanford University professor of law and medicine who focuses on health-data privacy.

Companies may also use the data under the law in ways to develop products that boost corporate profit, with no visibility or control for patients over how their data is used. “Some people just don’t want their data used in particular ways by particular parties,” said Dr. Mello, who has served as an adviser to Alphabet’s Verily Life Sciences.

Health and technology giants have pushed into healthcare data aggregation and algorithm development with mixed results.

has explored a sale of its IBM Watson Health business, as the company’s healthcare artificial-intelligence unit struggled, The Wall Street Journal reported in February.

Hospitals are uniquely positioned as brokers for data created by patients seeking care and interacting with doctors, laboratories, pharmacies and medical devices. They have increasingly sought to capitalize on that data in deals to aggregate patient records or develop products with pharmaceutical and technology companies. “They aren’t sleeping on this opportunity either,” said

Get an early-morning briefing about the coronavirus each weekday and a weekly Health newsletter when the crisis abates.

Fourteen hospital systems in February announced a newly formed company, Truveta Inc., to sell access to their anonymized records for patients across 40 states. Other hospitals have invested in health-record analytic companies, such as

The multiyear HCA-Google agreement will seek to develop algorithms using data from 32 million annual patient visits that could help monitor patients and guide treatment, said Dr. Perlin. During the pandemic, HCA used its own technology to monitor critically ill Covid-19 patients and notify doctors of potentially better treatment options. The company found that survival rates increased by comparing the outcomes for patients before and after rolling out the algorithm.

The companies will also seek to develop algorithms that would help improve operations, Dr. Perlin said, such as by automating how hospital units track inventory of critical supplies.

Write to Melanie Evans at Melanie.Evans@wsj.com