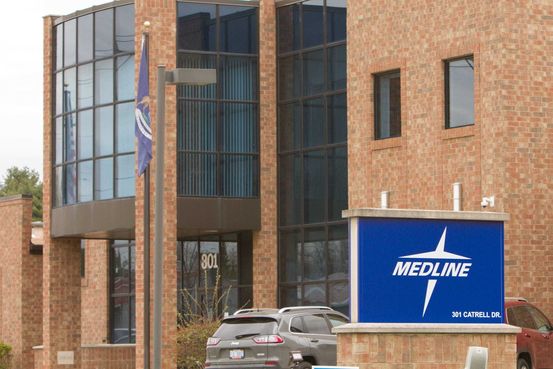 Carlyle Group Inc. and Hellman & Friedman LLC said Saturday they struck a buyout deal that, according to people familiar with the matter, values the closely held medical-supply company at more than $30 billion—or around $34 billion including debt. That makes it the largest leveraged buyout since the 2007-08 financial crisis.

Merger-and-acquisition activity has been busy across the board so far this year, with a string of large tie-ups lately including

$53 billion deal to combine with

outbidding a rival to buy

In the U.S., $1.24 trillion of deals have been reached in 2021, up more than fourfold compared with the same period last year when lockdowns crimped economic activity and acquisition volume, according to Dealogic.

But private-equity firms, tasked with putting over a trillion dollars to work, had largely shied away from the biggest deals—until now.

Major news in the world of deals and deal-makers.

Big buyouts, which involve borrowing large amounts of money to amplify potential returns, all but disappeared after a number of the targets performed poorly or filed for bankruptcy in the wake of the financial crisis, weighed down by enormous sums of debt.

Between 2005 and 2007, private-equity firms sealed 18 deals valued at $10 billion or more, according to Dealogic. Since then, they had only struck 10, before Medline.

There had been signs firms were regaining their taste for big buyouts, as they approached targets including Japan’s

NV. But until now no such deal had gotten over the finish line.

“This could be the transaction that opens up the floodgates,” said Dusty Philip, co-chairman of global M&A at Goldman Sachs Group Inc., which advised Medline. “You have ideal conditions for large LBOs: low interest rates, aggressive financing markets and a significant amount of dry powder.”

Indeed, buyout firms are now sitting on more than $1.6 trillion of unspent cash, according to data provider Preqin—and that doesn’t take into account the billions that big institutional investors are clamoring to invest directly in deals.

“
‘This could be the transaction that opens up the floodgates.’
”

The fact that three private-equity firms came together—they are equal partners—harks back to an earlier era before the crisis, when so-called club deals were common. They fell out of favor as firms have generally preferred to form partnerships with their biggest investors, but have started to appear more lately in another sign that the scope for megabuyouts is increasing.

The Medline deal capped a rapid-fire sales process that kicked off just over two months ago, attracting a field of bidders that is a who’s who of the biggest buyout firms. The size was part of the appeal, giving the firms the ability to put large amounts of capital to work without having to worry about competition from strategic bidders because of antitrust concerns. In a sign of how hungry the firms were for the deal, senior executives from the bidders made pilgrimages to Medline’s suburban-Chicago headquarters to woo members of the family that founded the company.

late Friday and signed the deal Saturday afternoon, the people said. The sales process had originally been expected to last several more weeks.

Based in Northfield, Ill., Medline is a little-known but major competitor in the field of medical equipment. It manufactures and distributes equipment and supplies used in hospitals, surgery centers, acute care and other medical facilities in more than 125 countries.

Medline’s vast product lineup includes surgical gowns, examination gloves and diagnostic equipment, as well as consumer-facing brands such as Curad bandages. It has some $17.5 billion in annual sales.

The brothers James and

founded the company in 1966, taking it public in 1972 before buying back the shares five years later. Since 1997, James’s son Charlie has been Medline’s chief executive, working alongside President

and Chief Operating Officer Jimmy Abrams, who is Andy’s brother-in-law.

The family would remain the single largest shareholder in the company after the buyout and the management team would remain in place, the company said. GIC Pte Ltd., Singapore’s sovereign-wealth fund, is also investing in the deal.

Write to Cara Lombardo at cara.lombardo@wsj.com and Miriam Gottfried at Miriam.Gottfried@wsj.com

adminhttps://go8ktv.com
Previous articleA G-7 Deal on a Global Minimum Tax for Companies Faces Hurdles
Next articleMove to a New City for Work? No Thanks