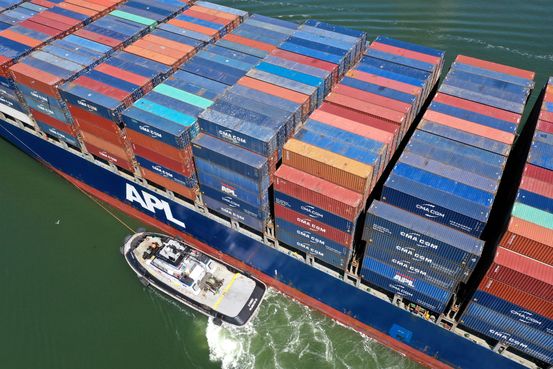 WASHINGTON—The U.S. trade deficit narrowed in April from a record level in March as disruptions in global supply chains and a slowdown in consumer spending contributed to a drop in imports.

The deficit in trade of goods and services shrank by 8.2% to a seasonally adjusted $68.9 billion in April, the Commerce Department said Tuesday, compared with the record $75 billion gap in March.

Imports declined among goods affected by a shortage of semiconductors, including home appliances and automotive vehicles, parts and engines. Consumer demand for imported goods, including apparel and toys, slowed from a torrid pace in March, when Americans got the biggest lift from the latest round of government stimulus payments.

The trade deficit is poised to return to its widening trend as government spending and vaccine rollouts spur a recovery that is outpacing many other advanced economies, said

“Domestic demand is roaring back amid reopening and a rapidly improving health backdrop,” he said, while in much of the rest of the world “demand growth will revive at a slower pace.”

Global trade, which collapsed during the coronavirus pandemic, has bounced back this year as economies reopened. A resurgent U.S. consumer, flush with multiple rounds of government stimulus checks and strong job growth, has been driving demand for imports. The deficit over the past three months was the widest on record.

At the same time, manufacturers around the world are struggling to meet that demand. Much of the world trails the U.S. in vaccination rates, and the pandemic has disrupted supply chains, leading to shortages of crucial items and manufacturing delays.

A World Bank report released Tuesday highlighted the diverging fortunes of the U.S. and much of the rest of the world. Advanced economies such as the U.S. typically grow more slowly than developing economies or the global average, but this year, the U.S. economy is on course to grow 6.8% while the world economy will grow 5.6%. Emerging markets, excluding China, will grow just 4.4%, the World Bank said in its semiannual global growth forecasts.

Such robust growth in the U.S. is likely to continue to stoke demand for imports. The World Bank noted in its report that trade would be recovering even more strongly but that it is “currently being constrained by supply bottlenecks and strains in global value chains.”

While U.S. imports took a step back in April, exports climbed, led by a $1.4 billion rise in civilian aircraft, and a lift to a range of commodities, including a $1 billion increase in crude oil and gains in shipments of other petroleum products.

Both exports and imports have recovered substantially since a year ago when Covid-19-related business shutdowns were at their most intense. Monthly exports have risen by $55 billion since a year ago, while imports are up $71 billion.

Write to Josh Zumbrun at Josh.Zumbrun@wsj.com

adminhttps://go8ktv.com
Previous articleMillions of J&J Covid-19 Vaccines Are at Risk of Expiring in June
Next articleWATCH LIVE: Bill Nye testifies before Congress about impacts of climate change on homeland security